In Partnership with The Rock & Roll Hall of Fame
Ryman Auditorium

Featuring Charlie Worsham, The War and Treaty, Gavin DeGraw, Maddie and Tae, and more to be announced 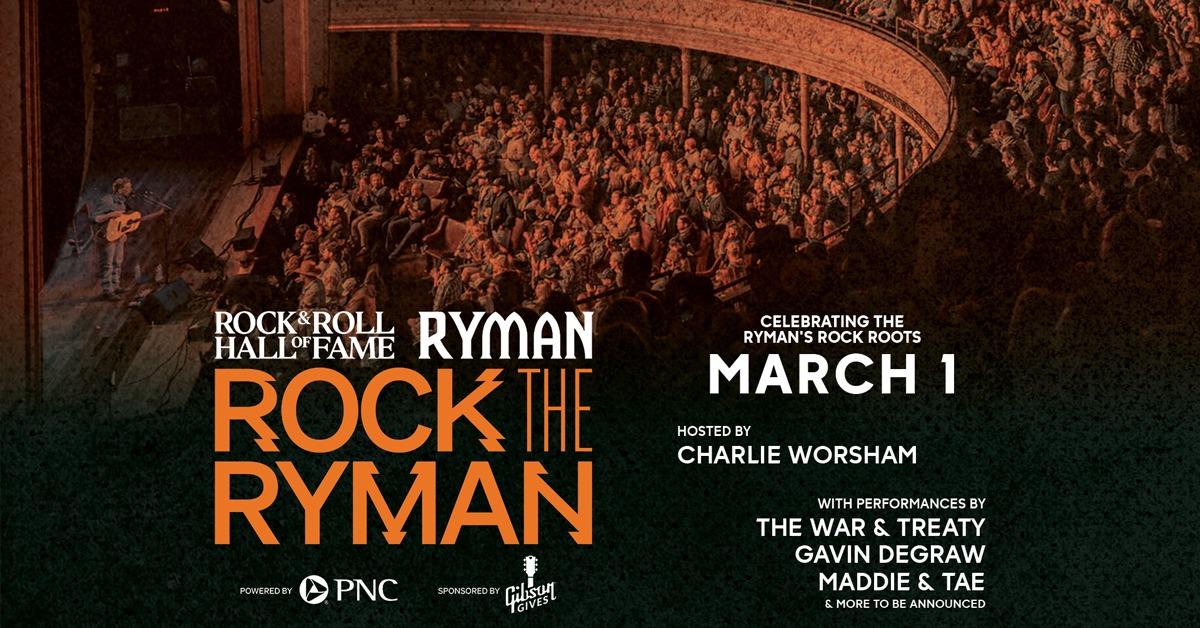 Cleveland’s Rock & Roll Hall of Fame and Nashville’s historic Ryman Auditorium recognize the common ground between iconic locations as well as the forces that emerge in live music. Consequently, they’re teaming to present “Rock The Ryman,” a concert with Nashville’s most intriguing artists and special guests. Celebrating the intersection of rock & roll and country, this very special night of music will honor the legacy and impact of the Rock & Roll Hall of Fame inductees who have graced the Ryman stage. Powered by PNC and sponsored by Gibson Gives, “Rock The Ryman” is scheduled for 7:30 p.m. CT, on Wednesday, March 1.

“More than 100 Rock & Roll Hall of Fame Inductees have performed on the Ryman’s hallowed stage throughout its 130-year history,” said Greg Harris, President & CEO of the Rock & Roll Hall of Fame and Museum. “We are thrilled to continue our collaboration with the Ryman by bringing together artists and fans for one incredible night to experience the power of rock & roll through some of Nashville’s great talent.”

Hosted by noted guitarist/songwriter Charlie Worsham, “Rock The Ryman” will explore how country music has shaped rock & roll and how rock & roll has merged with today’s Americana, country, and beyond. The first group of performers to be announced are 2020 Folk Alliance Artist of the Year and 2022 Americana Honors Duo or Group of the Year The War and Treaty; multi-platinum, Grammy nominee Gavin DeGraw; and groundbreaking country duo Maddie & Tae.

More performers will be announced in the coming weeks to keep the excitement building – and expand the circle of influence. Each artist will be asked to perform two or three songs by Rock & Roll Hall of Fame Inductees that have moved them or influenced them in some way.

Proceeds from the event will help preserve and celebrate the history of rock & roll at the Rock & Roll Hall of Fame and Ryman Auditorium.

Last May, the Ryman was designated as an official Rock & Roll Hall of Fame Landmark, joining 11 other rock & roll institutions throughout the country including Austin City Limits, the Crossroads in Clarksdale, MS, J&M Studios in New Orleans and Whisky a Go Go, among others.

In November, the Ryman opened a major exhibition Rock Hall at the Ryman to celebrate the Ryman’s mark on rock & roll history. The interactive exhibit is housed in the venue’s newly transformed 5th Avenue vestibule and features Rock & Roll Hall of Fame Inductees including James Brown, The Byrds, Eric Clapton, Foo Fighters, Joan Jett and Dolly Parton in addition to country music icons like Johnny Cash, Elvis Presley and Hank Williams, who were early practitioners of what would become rock & roll music.

“This memorable evening is certain to build on PNC’s legacy of investing in music and advocating for broad engagement in the arts as a powerful avenue for advancing education, diversity and inclusion, and economic development,” said Mike Johnson, PNC regional president for Tennessee. “We are delighted to bridge our relationships with Cleveland’s Rock & Roll Hall of Fame and the Ryman under the same roof.”

PNC Bank has a strong history of supporting the communities it serves through music sponsorships and programming. In addition to The Rock & Roll Hall of Fame in Cleveland and the Ryman Auditorium, PNC has sponsorship agreements with Austin City Limits and ACL Live, in Austin, Texas.

“PNC Bank is a longtime supporter of The Rock & Roll Hall of Fame,” said Pat Pastore, PNC regional president for Cleveland. “Music is such a great platform to connect across communities, neighborhoods and generations. We’re excited to collaborate with our Tennessee market on this amazing event.”

More information about the Rock The Ryman concert, Rock Hall at the Ryman exhibit, daytime tours and shows can be found at ryman.com.

About the Rock & Roll Hall of Fame:

Rock Connects Us. Our mission is clear: To engage, teach and inspire through the power of rock & roll. We share stories of the people, events, and songs that shape our world through digital content, innovative exhibits, live music, and engaging programs. At the Rock Hall, we are dedicated to making a difference. We intentionally foster a diverse and equitable Museum that encourages and embraces creativity and innovation. As a community leader, we value, empower, and respect all people. Diversity, Equity, Accessibility & Inclusion is more than just a policy. It supports our mission and defines our future. Join the millions who love it as much as you do. Experience us live or online – Visit rockhall.com or follow the Rock Hall on Facebook (@rockandrollhalloffame), Twitter (@rockhall), Instagram (@rockhall), TikTok (@RockHallFame), and YouTube (youtube.com/rockhall). Long Live Rock!

A National Historic Landmark, Ryman Auditorium was built by Captain Thomas G. Ryman in 1892 as the Union Gospel Tabernacle. A 13-time winner of the prestigious Pollstar Theatre of the Year award, the historic venue is well-known as the Mother Church of Country Music and is the most famous former home of the Grand Ole Opry (1943-1974). The Ryman’s thriving concert schedule hosts more than 200 shows per year, and the venue is open for daytime tours year-round. The Ryman has also been featured in numerous film and television projects including Coal Miner’s Daughter, The Johnny Cash Show, American Idol, Nashville and more. Ryman Auditorium is owned by Ryman Hospitality Properties, Inc. (NYSE: RHP), a Nashville-based REIT that also owns and operates the Grand Ole Opry, WSM Radio and Ole Red. For more information, visit ryman.com.

PNC Bank, National Association, is a member of The PNC Financial Services Group, Inc. (NYSE: PNC). PNC is one of the largest diversified financial services institutions in the United States, organized around its customers and communities for strong relationships and local delivery of retail and business banking including a full range of lending products; specialized services for corporations and government entities, including corporate banking, real estate finance and asset-based lending; wealth management and asset management. For information about PNC, visit www.pnc.com.

For over 129 years, the iconic, American instrument brand Gibson has been shaping sound across generations and genres. Gibson, and its charitable arm Gibson Gives believe in the power of music, and that getting instruments into the hands of those with a desire to make music is a life-changing event. Gibson Gives--a 501(c)(3) is committed to making the world a better place by supporting non-profit organizations in their efforts to advance musicians, youth-focused education, music, and wellness initiatives. 100% of all donations to and from Gibson Gives go towards giving the gift of music. In the last three years, Gibson Gives has raised over $3.5 million dollars worldwide through its mission. Gibson Gives believes investing in music education will yield better people, better leaders, and a better world. Gibson Gives is changing lives…one guitar at a time. For more information, visit: www.gibsongives.org.